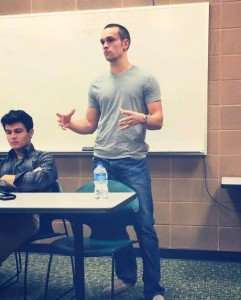 Homeless, living in his truck and crashing on friend’s couches, addicted to pills and binge-drinking for 4 solid months, he decided it was time to make a change. His family had told him that as long as he wanted to be active in his addiction they were unable to support him. But he also knew they were his only hope.

Desperate and broken, he called his dad to ask for help. He was surprised when his dad welcomed his call and told him “as long as you do the right thing, you always have a roof over your head”.

Trying to get sober was more difficult than he expected. He would go to 12 step meetings, but then go drinking. When he finally got caught, he was given only one option. Go to treatment. When Jacob entered treatment at St. Christopher’s Addiction Wellness Center he was not sure he was able to quit drinking and drugging. During his family session, his dad was there to continue to support him and, with tears streaming down his face, he told his son that he had accepted the fact that he was going to die.

In that moment, Jacob made a commitment. It wasn’t necessarily a commitment to stop partying, but he was committed to not hurting his father anymore. Jacob did 8 months of treatment at St. Chris, moving through the phases of inpatient, extended care, and sober living. His relationships with the staff and the long-lasting bond he formed with the other young people in treatment are what, he says, has allowed him to be successfully sober for almost a decade. Jacob continues to volunteer his time as a weekly meeting leader at St. Christopher’s and says his favorite thing about being sober is having the ability to help other people. He says the brotherhood at St. Chris changed his life as they helped teach him the way, gave him rides to 12 step meetings, and he is still in touch with many of his fellow treatment-mates and alumni to this day.